Silver is one of the most frequently traded precious metals with online traders and can be traded by itself or as part of a specific trading strategy. Many traders often look for signs of its correlation with gold, however there are many factors that can influence the value of silver as a tradable commodity.

Silver is one of four widely traded precious metals and of all the members of the group, it is the one with the most practical uses. Thanks to its physical properties of high thermal and electrical conductivity and its ability to reflect light. Which makes it ideal for use in the electronics and electrical industries, the production of high-quality mirrors and photography, the latter being the biggest user of silver. According to data from the USGS or United States Geological Survey or USGS.

Silver deposits are found around the globe and there are significant reserves in Peru, Poland, Mexico and Australia among others, as we can see in the chart below. The USGS estimates that there are some 530 billion tonnes of silver yet to be excavated; that's a lot of silver but new sources of demand for silver continue to emerge. 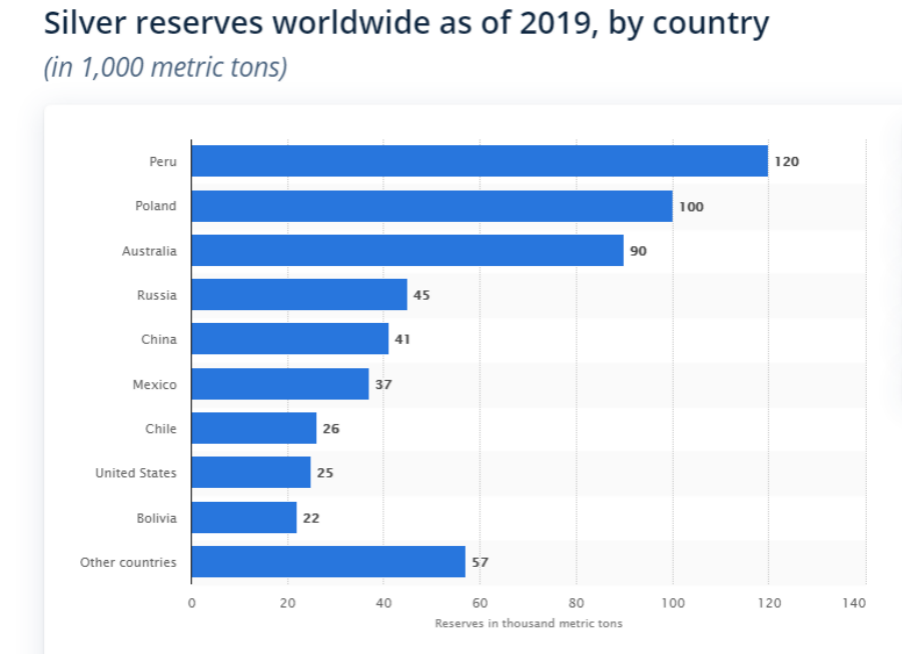 Rather fittingly given their close relationship, just under 16% of the world's silver output is produced as a by-product of gold mining though silver is a commodity in its own right.
Silver is traded and priced in US dollars and measured in units of troy ounces, a troy ounce of silver contains just over 31 grams of the white metal. Aside from its industrial uses, silver is used in jewellery and decoration and has a long history of being used as money particularly in the form of silver coins. Though unlike gold, silver is not held in any great quantity by the world's central banks.
Silver is subject to the forces of supply and demand, the same as the other precious metals. When demand is high prices can rise, when demand is low, they can fall. However, given the wide range of commercial uses for silver, there are many more inputs or influences on the silver price.

As with gold, silver is traded both as a futures contract and as bullion in the spot or cash markets.

Futures contracts for silver are traded on the CME, the owner of the NYMEX exchange whilst the spot or cash market is based in London.

Below we can the silver price UK chart, the chart of the spot or cash price for silver bullion in the London market. 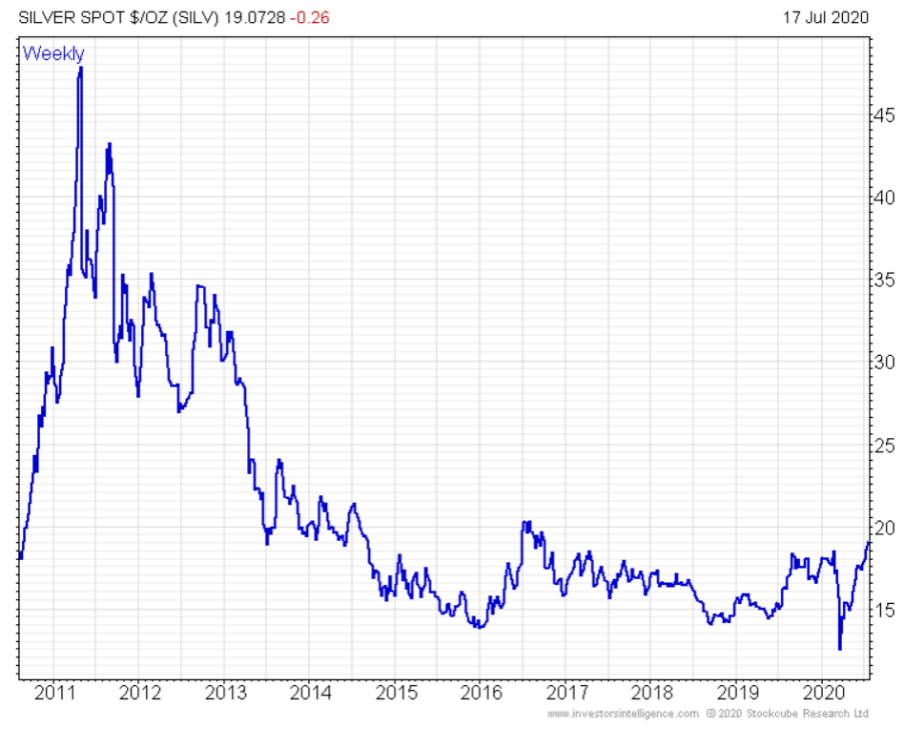 The history of silver is an interesting one and the chart above plots the price of silver between 2010 and 2020 as you can see silver peaked in April 2011 trading at US$49.79 per ounce.

It’s worth noting that silver prices peaked well ahead of those of gold, whose own highs were not posted until early September 2011, almost 5 months later.

Though if we dig deeper, we find that there have been plenty of opportunities for traders over that period, for example, silver posted lows of $11.77 per ounce in the March 2020 market sell-off before rebounding.

What does silver trading involve?

As with any trading, it’s about spotting opportunities within price-action and positioning yourself in the best way to take advantage of them.

TigerWit offers its clients access to silver CFDs or Contracts for Differences. These are cash-settled contracts with no fixed expiry date. This means that clients can hold positions in silver for as long or, as short a time as they want. For example, for just a few minutes or hours or a week or more if they prefer.

As we have said CFDs on silver are cash-settled contracts meaning that counterparties to trade, are credited or debited with cash, depending upon the outcome of their silver trade.

If the trader makes a profit trading silver CFDs they will receive cash credit, equivalent to their trading profit in their account. But of course, if they lose on a silver trade then their account will be debited by the amount they’ve lost.

Because CFDs are cash-settled, traders don’t need to worry about making or taking delivery of any physical silver. It also means that traders can use CFDs to trade silver both on the long and the short side. A long trade is a purchase or buy trade whilst a short trade is a sale.

When traders go long of an instrument using a CFD they would do so in expectation of the price of the underlying rising in value. If it rises above their purchase level, then the trader will have a  running profit on that long position.

When you trade silver using CFDs you never own any silver instead you are speculating on the rise and fall of silver. As such, CFDs are not suitable for long term investment but they are very well suited to shorter-term trading particularly for trading those instruments whose values regularly fluctuate, such as silver.

Trading silver using CFDs is what is known as margin trading. Under margin trading the money in a traders account is leveraged or geared up by their broker. Meaning that the trader's deposit or account balance is magnified to allow them to control a much larger position than their funds would otherwise allow.

The gearing or leverage used in margin trading not only magnifies a trader’s deposit it also magnifies the PnL or profit and loss in trading positions. That means profits in margin can be that much greater than the profits from non-leveraged trading. But of course, so can the losses.  Margin trading involves risks. If you don't manage those risks, then your accounts lose money. Traders need to respect the use of leverage and understand its impact on their trading and their account balances. Over-traded or over-leveraged accounts lose money.

Silver can be traded 24 hours per day (with just short trading breaks) five days per week.

Silver markets open late on a Sunday evening London time and trade almost continuously to their close in New York on the following Friday evening.

TigerWit’s trading app for Android and iPhone means that you can take the global markets with you, in your pocket, wherever you go. You can trade silver using our app from just about anywhere you find a reliable and stable connection to the internet using the app you can monitor account balances and trade performance, open or close trades and draw charts etc.

As we noted earlier the silver price is subject to the influence of supply and demand for the metal, and because there are many industrial uses for silver these influences can originate from many areas and new sources of demand are being introduced. For example, silver is used in the production of the equipment that will drive new high-speed mobile phone systems, the so-called 5G or fifth-generation networks, silver is also used in solar cells and power generation.

As well as these new technological influences, silver and silver prices are subject to other well-established influences such as the value of the US dollar. A strong dollar is seen as being negative for commodity prices whilst a weaker US dollar has boosted the price of commodities.  It follows then that silver traders keep a close on how major FX pairs are performing against the US currency on the foreign exchanges.

Silver prices can also be influenced by changes in the price of gold and the ratio between the two metals. For many years’ traders have looked at the amount of silver that an ounce of gold can buy and vice versa and used this ratio as a way to value the two metals relative to one another.

As a safe haven asset silver prices are also influenced by the mood of or sentiment in the markets if the market is in a Risk-On mode then safe-haven assets are generally out of favour and money moves away from those assets and into riskier investments and trades such as emerging currencies or equities. However, if market sentiment is Risk-Off then traders tend to sell out of risk assets and move their money into safe havens of which silver is one.

The chart below plots the gold-silver ratio (the gold price divided by the silver price) between 2010 and 2020. 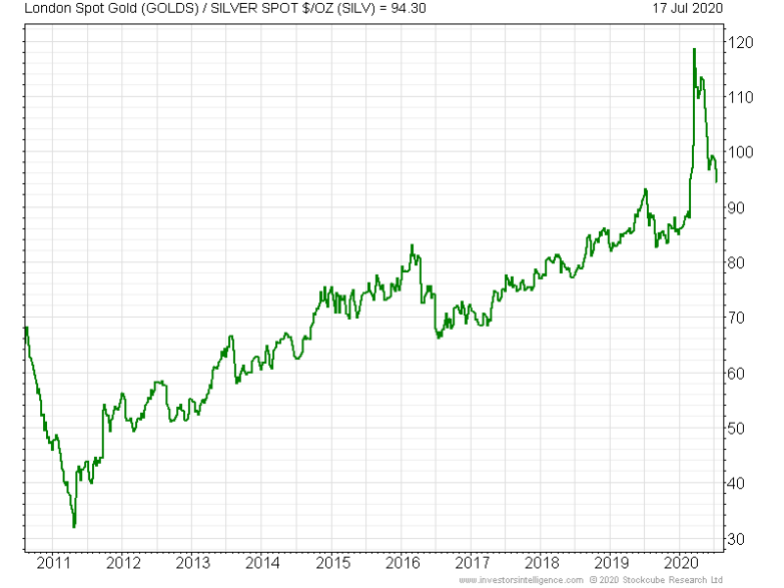 That ratio was at the lowest point on the chart when silver prices peaked in April 2011 and at its highest in 2020 when gold prices moved closer towards their all-time highs even as silver prices remained largely unchanged. Though as we can see the ratio has been falling away from that peak.

Silver prices can also be influenced by interest rates and rates of inflation. One of the objections to own ing precious metals has been the fact they do not produce or pay an income, unlike other safe-haven assets, such as government bonds.

Precious metals such as silver and gold are seen as being a hedge against inflation, which can undermine the purchasing power of paper currencies over time. Particularly if a nation-state is printing money. In these circumstances, money can move out of that currency and into precious metals like silver which has long been seen as a store of value and an alternative form of money.

To start trading silver you will need to open and fund a trading account. The money that you put into your trading account should be money that you can afford to lose, what is known as risk capital. Many trading accounts lose money and that’s often because traders don’t do their homework properly and don't understand the products they are trading, and the high risks involved in margin trading.

These traders often take positions that are too large or place too many trades and it's for these sort of reasons that trading accounts lose money. Trading silver using CFDs can be high-risk learning to manage those risks are all a part of becoming a successful silver trader.

The good news is that before you take the plunge into live trading you can get to grips with how silver and silver prices work, using our experience account.

The experience account is a realistic simulation of the global markets in which you can experiment, learning to spot trading opportunities, place and manage orders, draw charts once you have become familiar with the way our trading platforms work and how silver prices move then you can start to create your own trading strategy. When you are happy with that then you graduate to the live trading environment.